Saturday wasn’t very exciting, I wrote some thoughts I had on feminism (feminism being an umbrella term which I’m currently using rather than going into details right now.)  But I’ll post those thoughts separately when I’ve fleshed them out a bit more.

SUNDAY: I was still having trouble adjusting to the time difference and woke up at 4pm, whoops. Most of you who know me probably aren’t surprised that I woke up so late, however before I came here I had adjusted back to a normal sleeping schedule. I swear! So I grumbled, got up, took a shower, ate some food, played “how do I get you outta my room” with the cat for a few minutes and ventured into the emerging twilight to check out the San Telmo sunday market. I took the “subte” part of the way. The cool thing about the subway in Buenos Aires is that it’s the 3rd oldest system in the world, and the ONLY one with the original cars from 1913 still running on the track. I didn’t get a good picture (I didn’t want to scream tourist) but here’s one online. I got off and happened to walk down a street with some outstanding examples of the enchanting street art here in BA. Que suerte! This is the whole album, and here are two of my favorites: 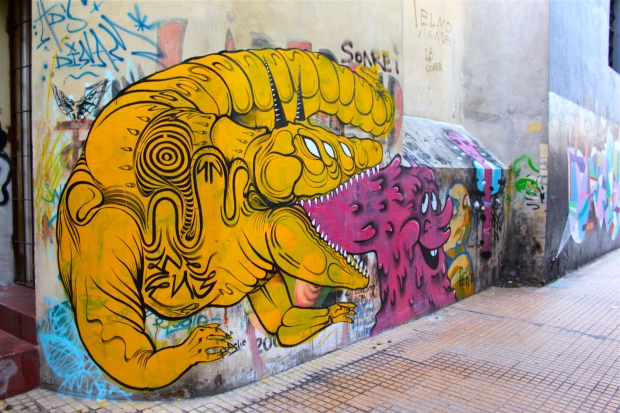 absolutely gorgeous… and literally everywhere. The porteños have no qualms when it comes to where they’ll put their graff. Some monuments are respected and kept clean, but most aren’t. I was astonished at first and thought it was really disrespectful, but when you take a look back, even 7 years, into the history of Buenos Aires you see why it is such a beautiful thing in theory. Insubordinate would be a more appropriate word… each splash of paint across a monument represents a day of struggle. Their freedom of expression is more important than their past leaders, I get that now. However, I will say that obviously not all of the graff is poetic and metaphorical, some of it’s just trash; but there’s a dark and a light to everything.

I finally made it to San Telmo but, mal suerte… the market was closing up. But! As the sun set, tango dancers flooded the plaza dorrego.

Tough to get a pic in focus with the dim light, but there’s a video. This is what I wrote in my journal, “The plz filled with dancers of all backgrounds and levels of experience. It was the cutest thing I’ve ever seen. The tiny yet integral and intense steps, the small movements with huge volume and intention, the improvised rhythm with no rhyme… que preciosa.” I had a stupid grin plastered on my face the entire time I was shyly snapping photos.

I sighed and wished I had a tango partner but then straightened up and began looking for something much more realistic… a snack. All that walking had made me hungry. So I checked my guide and found a café close by. Bar el Federal was only a few blocks away so I headed there, but something stopped me.

A long forgotten string attached to my heart suddenly became taut and jerked me towards the closest collective primal expression of life. I could only describe it as soul. Which made me think, perhaps none of us have a soul… but there is one large soul that we are all connected to. Be it karma or soul or ideas or rhythm or ether… it connects us all together. You borrow from it and give back to it throughout your life and when you die, your energy feeds back into that large group in order to shoulder the burden of those who need to take when they cannot give. It’s the space between the space, the feeling that someone is looking at you and the reason you laugh. When you hear music like I heard… you can’t help but feel the need be part of the bigger collection. I was pulled to the sound out of some unconscious thirst… or maybe I’m just a curious Latina. Either way, with only the map of my heart, I found a street plugged with people dancing in praise of our collective soul.

I couldn’t have left the sound even if I had wanted to. We danced, baby, abuelo, chica, wretch and tourist- there was no color age or nation, only the need to be. Once again, the pictures are kinda crap (plus I put my camera away after about a minute so I could raise my hands up to the moon) so here is a video.

Finally I was sated (soul-wise) and headed to snack town. I was REALLY hungry at this point. I sat down and wrote this in my journal, “I’m at a café called Bar el Federal, apparently it’s famous and I’ve yet to see a waiter. I guess they don’t come outside. ok I moved inside, I think it’s ok to sit wherever. The waitress just smiled! I’m in! …I think I just ordered a turkey sandwich… OMG I’m so hungry bring me some bread!!! The people here are mixed together in a way I’ve never seen before. It’s quite extraordinary. I cant tell the tourists from los porteños. The table next to me just got a shit load of food, I wished we lived in a world where it was acceptable for me to ask if I could possibly eat the rest of their bread or, better yet, that they would find a need to be as compassionate as we’re all supposed to be and give me their extra bread out of fear of being rude, that’s be nice. True communism I guess. A society in which you were punished or shunned socially if you aren’t actively compassionate and conservative with your materialism (GIVE ME YOUR FUCKING BREAD!!) Why don’t I get some bread?! Perhaps it’s because she can assume from my outfit that I don’t like bread- or maybe this is some kind of secret ‘we don’t give bread to fatties’ thing. All I know is that I could be nommin’ some bread right now and am (w/o reason) offended by this outrageous secret bread law. To top it all off, the table next to me just got ANOTHER basket of bread and are stuffing their faces with it. QUE PASANDO AQUI!?!” …I stopped writing there because I got my sandwich. I was pretty hungry, lol.

So onto my next fail, trying to attend the celebration of the Chinese New Year in Buenos Aires’ small Chinatown. I took a cab because I couldn’t find the right bus and found myself at the end of a long day of festivities. I was upset and tired so I returned home, read some more of The Moon is a Harsh Mistress and slowly fell asleep in the orange glow of the street light outside my window.

For all the pictures from my day, please click here.