So I dragged my corpse out of bed early one cold dead morning and hauled my bones to the Recoleta Cemetery. A grave feeling settled over me and dug right down to my skeleton. The death everywhere gave me a feeling of my own mortality and gripped my heart till it turned stone cold. 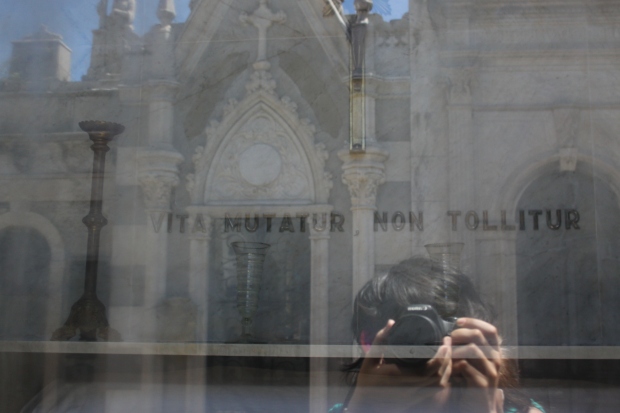 The extravagance scared the life out of me, it was like a cryptic plot to bury one’s feelings with stone, gold, flowers and boxes. It was quiet as a tomb ‘cept for the tourists laughing themselves to death over the various funny names they encountered.

I thought their grim humor would soon decompose as I walked the ground, wishing my feet weren’t killing me. I almost died when the sight of (what I thought was) a living angel popped out of the ground through the crack in a tomb’s door, it had me sputtering and coffin‘ for sure. My life was rotting away in the heat and it was time to terminate my visit to the reaper’s playground. I followed the tourists to Evita’s grave, then said bye bye to the death museum.

In no way am I trying to make fun of the long passed, I just think puns are fun. Plus, Recoleta was ALL about not letting the dead be forgotten.. so why not remember them with some humor too?

Check out all the pictures here.

a song from the viv to all of you out there ❤

(pic on the right is my room)

So far my impressions are thus:

-this place is gritty as fuck

-the spanish is very mushy and some key words are very different, for example “chorizo” is steak here!

-the pizza has no sauce, wtf

-I am the tallest person in BA

-this is deff a fight or flight city, you gotta learn fast or else get pushed off the bus by a woman with two kids screaming for “paletas”

-the sidewalks are crap, I can’t even count the number of times I’ve almost broken my ankle… and I’ve only been here two days!

The people here (portenos) are intense, I feel as if the city is about to become one big riot. I’ve never seen the homeless and poor mixed so blatantly into the bourgeois of a city. The decadence of the past is crumbling into piles which the poor placidly sift through in front of cafes. It represents a future that Los Angeles could definitely find itself in. Do people see each other here? Do they see the the graffiti written on every wall, statue and poster, or has it become the backdrop to their city? I’m not sure but I’ll continue to observe.

Thankfully, the coffee, wine and carne is amazing. Most of you who know that I recently became an honorary vegetarian, however, here in Buenos Aires I have been eating meat most of the time. Veggie options are few and far between here and I have yet to scout out the veg locations. In the meantime, I’m not denying myself the tasty tasty meat they have here. Life’s too short to give yourself limitations.

As for where I live. I am staying in a house called “Casa Los Angelitos.” It is a very old house in the barrio of Congreso. This area isn’t the richest of barrios, nor the poorest. I like it, it makes me feel like I’m in some sort of London Mexico hybrid with mushy language and great vino.

On the way here from the airport I saw my first illegal protest. A group of workers blocked the highway so we decided to drive on the grass, just to the side of the highway. Muy extrano…

Here’s some pix of the protest and La Casa: 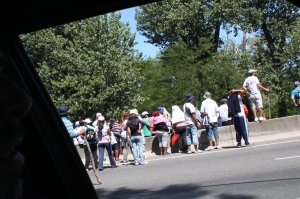