As I began this post Dry County by the B52’s came on… oh iTunes… how you swell my emotions.

Last night I started my evening (at midnight) at a restaurant called Chiquilin. I had an AMAZING steak (bife de chorizo especial) some great wine, un enselada con palma. They even brought me pate for free! I’ve only had pate once in Florence and I almost spit it out, but this was pretty good. On the way to dinner, a man stopped and started talking with me. He said he was a journalist and he deff seemed like one, I mean he knew enough English and spoke about Los Angeles and New York like he had written about it. Anyway, we got to the resteraunt and I said, (this was all in broken Spanish but I’ll type it in English…it’s better for all of us this way)

“Well, thanks for walking with me, bye!” to which he stuttered, “I ate already but I could get a beer, it’s strange for a woman to eat alone” I smiled and said quickly, “Not for this woman” and walked away. He seemed nice but forcing small talk is very hard and annoying for me. I was never very good at it.

After dinner, nom nom, I went to a bar called La Cigale which was really cool. I walked up some stairs to the bar area on the second floor. There were blue lights everywhere and a bar made of mosaic glass… very pretty. Up another flight of stairs I found a bunch of kids smoking and watching a band… I think the name was Deens… but I’m not sure. I couldn’t insert the video, but here is the link. The video is pretty crappy… but the band wasn’t so great either.

During the show I made friends with a group of guys who were smoking weed. They were engineers! So we talked nerd talk and they invited me to go to a club with them called Barhein. We were mostly downstairs where they played loud house music, which seemed kinda behind the times in Los Angeles standards. Either way, it was really fun to just dance around and look at the crazy lights. This is deff a place where you could wear sunglasses inside. Barhein is an old bank so we were dancing in the vault, super cool. Around 6am I said thanks to the guys and went on home in the pink, stary dawn.

At around 6:30am I got a piece of pizza and the pizza guy asked if I had a boyfriend, oy! I managed to half say in spanish, “Just gimmie my pizza!” and walked home happily. 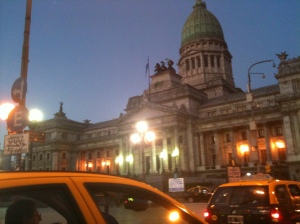